It used to be when I traveled that I always brought a Moleskine journal with me, and I would usually end the day, or sometimes begin it, by writing down everything that had happened since the last entry. This trip has been such a whirlwind that I barely have time to write a blog post, and I’m much faster on a keyboard than I am with a pen or a pencil.

So bear with me. I’ll try to provide more updates from Bulgaria and from Latvia, where I go tomorrow, and then will probably continue for a while once I get back home, until I’ve sufficiently unburdened myself of descriptions, recollections and reflections.

Yesterday was a very busy day, though I passed through it in a slight fog, thanks to having gotten only five hours of sleep the night before. I’d gotten more than 11 hours of sleep the previous night, still a long way from catching up with my jet-lag sleep deficit, but I thought that having slept for 11 hours straight I had finally adjusted my internal clock to Bulgaria. Until I tried to sleep Sunday night and lay there, wide-eyed, for three hours before finally falling asleep.

So, yesterday I spoke to a large class of journalism students at Sofia University, met with the editor and political writer at a daily newspaper (after which I was interviewed by the reporter), then ended the day by giving a talk, my first with a translator, at the Red House Centre for Culture and Debate. It was exhausting but exhilarating, and it was also humbling. Everywhere I’ve been the people I’ve spoken to are so receptive and respectful, so serious and full of questions.

At the Red House, where I more or less apologized for being yet another American traveling abroad to offer people advice — all the more daunting after having visited Plovdiv, with its 8,000 years of history — a man came up and told me, in quite good English and at considerable length, that it really didn’t matter that America was so new. The fact was that America has been a capitalist, democratic society for more than 250 years, he said, and people living in post-Communist Bulgaria have a great hunger for information that will help them rebuild a society founded on the rule of law. 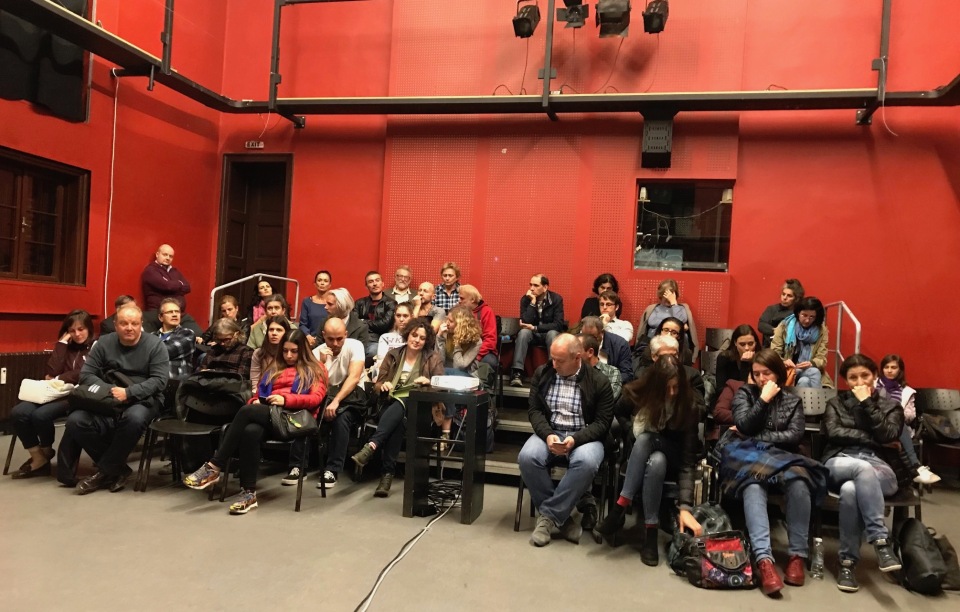 This was my audience at the Red House Centre for Culture and Debate. This was during the Q&A afterward, when six or seven people had already left.

I heard similar things while visiting the offices of the daily newspaper, rendered as Sega, or Now, in English. The editor-in-chief, Teodora Peeva, explained that 90 percent of the media in Bulgaria is controlled by one man. She also said, and I hope I’m getting this right, that this man’s family was not particularly rich, but that the government funneled billions of dollars to his mother in secret banking transactions, which allowed this man to establish himself as the press lord of Bulgaria.

Sega itself, meanwhile, is entirely funded by its owner, an independent businessman. Yesterday’s edition of Sega, 24 tabloid pages, contained exactly one advertisement. Teodora said the paper loses great gobs of money and has had its staff seriously reduced in recent years, like papers everywhere, but it continues to publish and though relatively small is the most respected newspaper in Bulgaria because it is the only paper that publishes the truth and criticizes the government, which has tried in vain to shut it down and to ruin its owner’s businesses. One has to deal with the situation one finds oneself in, but everything I heard made my complaints about Lee Enterprises and American media generally seem like small potatoes. We are, I hardly need to tell you, so privileged to live where we do.

In the Sega offices, I felt more than a little foolish taking up the time of people involved in such important, perilous work, but once again I encountered that hunger for information, for recognition, for hope in the future of Bulgaria. After the political reporter, Svetoslav Terziev, interviewed me, I said to him, “If there’s not enough there for a story, don’t worry about it. I’ve been there.”

“On, no,” he answered. “Full page.” I will be on a plane for Latvia when the next edition of Sega comes out, but Matt Hagengruber, my host and cicerone, promised to send me a copy of the paper. I’m pretty sure I didn’t say anything that will cause an international incident, but I guess we’ll see.

At the newspaper we also met the resident cartoonist, Christo Komarnitski. We were told that he is one of the most famous people in Bulgaria, hated by the powers that be for his brutally funny depictions of them, and loved by the common people for the same reason. He had his own office, stuffed with art supplies, books and back issues of the newspaper. That’s him above, handing me and Matt copies of a satirical journal that just came out, with his cartoon on the cover. He looked a bit like and reminded me of the late Roger Clawson, who wrote a column for the Billings Gazette and later the Billings Outpost, and who was similarly worshipped by discerning readers for his brilliant writing and his lampooning of bigwigs and blowhards. We weren’t long in the presence of Komarnitski, but I went away with the distinct feeling that we had met a world-class character. 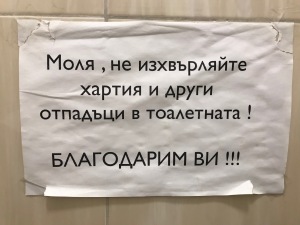 This sign, encountered in a restaurant’s toilet, evidently was emphatically instructing me not to do something or other. I hope I didn’t.

At Sofia University, where our day began, I was powerfully impressed by the young students, from all over Bulgaria. Two students introduced themselves to me as natives of the town of Montana, Bulgaria, and one of them told me she even had a Montana Grizzly sweatshirt, which I thought was pretty cool. I was told by the professor, Maria Popova, that her students knew English well enough for me to lecture in English. A few of them seemed a bit lost, but the rest, numbering about 30, seemed to be listening carefully and had the appropriate reactions at the appropriate times. And when I asked for questions afterward, everyone who spoke sound quite fluent.

Their professor thanked for me emphasizing that now more than ever, newspapers should be in the business of finding and reporting facts and straightforward information, and doing less and less opinionating, since in the era of social media if there is one thing the world does not lack it is opinions. When she asked her students at the beginning of the year why they were interested in journalism, Popova told me, almost every one of them had the same answer: “I want to be able to give the world my opinions!”

In the classroom and in the lecture hall in the evening, I gathered that people were genuinely fascinated by what I told them of Montana history, about Anaconda Company control of the state and nearly all of its daily newspapers. I had decided to include that historical sketch only after arriving here, as I explained in the same post I linked to above, and it has proved to be really effective.

People are fascinated by this notion that a corporation could effectively impose censorship on an entire American state, in an era not all that long ago. At the Red House, three or four people kept pressing me for more details on how the Anaconda Company was induced to finally sell off its newspapers to Lee Enterprises. They wanted to know if there was political pressure involved, or whether the pressure was exerted by common people, etc. In short, they wanted to know how they could begin to move their country, with its unique challenges, in the same direction.

As an aside, it was ridiculously entertaining to hear people asking questions through my translator, Bistra. All I would hear was a burst of Bulgarian (to me) gibberish, interspersed with the word “Anaconda.” Bistra, I have to add, was amazingly good at her work. Sometimes I would be so lost in admiration of her translating prowess that I would almost forget to go on speaking when she finished translating what I had just said. It was a strange experience, a first for me, of speaking through a translator. I had to cut my presentation in half, on the fly, for one thing, and I had to remember to keep my remarks segmented into bite-sized bits, so as not to lose my audience or my translator.

And here I don’t even have time to talk about my first real excursion on foot into the heart of the city center. That will have to wait for a future post.