So our guide told us over and over, and so we could see with our own eyes everywhere we looked. Matt Hagengruber and I were in Plovdiv, the second-largest city in Bulgaria, about an hour and a half east of Sofia. As we had learned by watching a short video inside a visitor center built over the remains of a fifth-century basilica, when Plovidv was called Philippopolis, the city is as old as Jericho, permanently inhabited for something like 8,000 years.

During that time, it has been conquered by virtually every empire worthy of the name. That would explain why, as a woman named Illyana told me the night before, that Bulgarians never expect current conditions to linger long. They have learned that any system, any culture, any civilization, is apt to become something else in due time.

And I should mention that our guide, so-called, attached himself to us by jumping up off the back stairs to another ancient church and offering directions to a high point from which we would have a “fantastic panorama” of the city (see photo above). Before we knew what was happening, he was leading the way, chattering nonstop, ordering us to take pictures of this or that house — “Old! Very old!” — and continually assuring us that the street paved with heavy stones was “original, not renovated, no Bulgaria, no Turkey, Rome!”, and letting us know, in case we had forgotten, that “I love United States!”

We knew that he was eventually going to ask for money, or perhaps even lead us into some kind of ambush, but he maintained such a steady pace of both walking and talking that we never quite found the opportunity to disentangle ourselves from his presence. As it was, he did take us to the fantastic view of the city, and through some of the most picturesque sections of the Old Town, and in the end he accepted my offer of 10 leva, or about $6, with only a small amount of grumbling.

We saw just enough of the city to make me want to go back some day and spend at least three days exploring the place. It has, as we also saw in the video, temples, mosques and Catholic and Orthodox churches rich in ornamentation, of which we poked our heads into only the Orthodox church. I had already felt a little embarrassment at the idea of coming halfway around the world to give Bulgarians advice about journalism, thinking that sometimes the United States ought to take some advice from cultures that might possibly have learned something in the course of seven or eight millennia. I felt it even more acutely in Plovdiv. 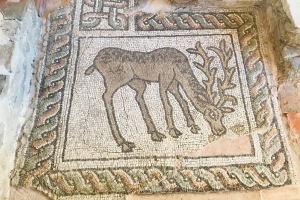 The trip to Plovdiv took place on Sunday, my one full free day here. In 45 minutes it will be Monday in Sofia, and tomorrow I have my busiest day yet — a talk in the journalism department at Sofia University, a visit to the newsroom of the Sega Daily and then a lecture at the Red House Centre for Culture and Debate. On Saturday, I gave two presentations to Americans working as Fulbright English teaching assistants in countries all over southeastern Europe.

I had kept my presentation only loosely formed until I got here, thinking it would be foolish to come up with something formal until I had had a better chance to learn a few things on the ground. I’m glad I waited. After listening to a leading Bulgarian journalist’s lecture on the state of press freedoms regionally, I decided to start my own presentation with an introduction to Montana history.

Yes, strange as it may sound, I thought it might be useful for those young Americans, and even more useful for Bulgarian journalists, to learn that Montana wasn’t just a pretty place of mountains, wildlife and winding rivers. So I told them about Butte, about the conflicts between the miners and The Company, about the Sedition Act and the occupation of Butte by the National Guard. I told them about the Copper Kings and the newspapers they bought or founded to fight their personal battles, followed by decades in which The Company owned most of the newspapers in the state and tamped down dissent and tumult by reporting almost nothing of importance about state and local affairs. I told them of the “great gray blanket” that covered Montana in those bad years.

I acknowledged that Lee Enterprises did a great thing by purchasing the company-owned newspapers in Montana, by allowing the publication of meaningful reporting that help usher in much-needed changes, including a new constitution. But I also had to tell them how Lee Enterprises, under pressure from market forces and its own bad decisions, gradually erased most of that goodwill, prompting, among many other things, my departure from print journalism into the world of online news.

Basically, I just want to let people know, as Illyana already knows, that everything is subject to change, sometimes from bad to better, sometimes from bad to worse, and that in this era at least, newspapers are vitally needed as a check on the power of governments, corporations, powerful private interests and, in some parts of the world, oligarchic strongmen. I’m still struggling with what I will say when asked, as I’m sure I will be, how anyone in a place like Bulgaria could possibly start an online newspaper when reporting on official corruption might lead to prison, or worse.

But before I turn this post into a lecture, let me just mention a few more of the diversions we had over the past two days. On Saturday, Matt and his wife went to the Marine Ball, while I accompanied the 80 or so American ETAs to a dinner at the Vodenitzata restaurant in the hills above Sofia. I learned on the way out of the restaurant that it is a fairly famous place, judging from a series of photos showing former patrons enjoying themselves there — including Morgan Freeman, Cuba Gooding Jr., Ben Kingsley, Japanese Prime Minister Shinzo Abe and former UN Secretary-General Boutros Boutros-Ghali. 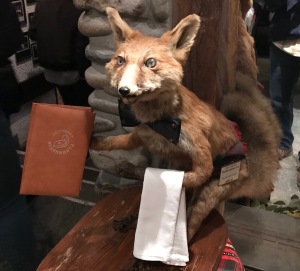 A stuffed fox, posed as a maitre’d, greets diners at the Vodenitzata restaurant.

The food was superb, but the real attraction was the display of Bulgarian folk-dancing and singing, followed by a display of fire walking, a custom that apparently dates back to pre-Christian pagan rituals. I loved the music, especially that produced by the gadulka, an outlandish looking thing with four or five main strings stretching over half a dozen or so resonating strings. The top strings are bowed and the strings themselves given their tone not by pressing them into the neck, but by bringing them into contact with the fingernails, or so I was given to understand. It has a frenetic, otherworldy sound, as did the voice of the female singer who accompanied the band on several numbers.

The fire dancers did their thing by tending a wood fire on a stone patio behind the restaurant while we ate, then raking the coals into the shape of a cross, allowing them to burn down still more before scattering them around a broad circle. The man and woman, dressed in traditional customs, then cavorted through the coals barefoot, more or less sweeping the embers aside as they dashed around in circles, occasionally picking up sticks with glowing ends and waving them around, as we Americans do with sparklers on the 4th of July. I wish I could give you a better description of the proceedings, but the only light was that of the embers, and there were so many people watching that I was standing a good distance away, too far to see much in detail. Still, it was exciting and enchantingly heathenish.

In Plovdiv we also heard some fine Bulgarian folk songs, played by two elderly gents with Spanish guitars. As I told Matt, it was good and would have been excellent had they taken the trouble to tune their guitars. But even musicians get old, and their hearing sometimes weakens. I can just hear some of you saying that the problem may have lain with the impaired hearing of the aging musician writing this post, but no. The guitars were out of tune.

Inside the restaurant, our regiment of young Americans took up two large rooms, and the din created by 80 exuberant voices drove me out of doors two or three times, just for some quiet. At the embassy the other night, I was talking with some Bulgarians and with some older Americans, and all agreed that young Americans are the loudest people in the world. Matt told me that Bulgarians, when they are in a large group, actually lower their voices to avoid creating a din, the better for all to hear one another. What a concept! Didn’t I say that we Americans could learn from other cultures, if only we would listen?

1 thought on “An ancient city, Montana history and some fine music”